Proofreading in the news 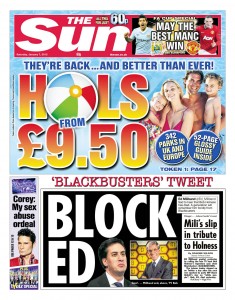 It’s not often that proofreading – or lack of – becomes a front page news story, but that’s exactly what happened last week, thanks to a slip of the keyboard by Labour leader Ed Miliband. It seems everyone is on Twitter these days, even shadow PMs, and in a tweet about the death of Blockbusters’ TV presenter Bob Holness Miliband accidentally called the programme “Blackbusters”. A simple enough mistake to make when you’re typing in a hurry, but one that The Sun thought worthy of the front page!  Typically the timing was bad, following hot on the heels of the much-reported tweets by Labour MP Diane Abbott about inherent racism and divide and rule policies, but at least The Guardian kept a calm head and saw the unfortunate typo for the non-story it was.

Another typo-related story, with the potential for a more serious outcome, was reported by the Daily Mail in the same week. An American man accidentally pressed the 0 key instead of the 8 on his mobile phone when setting up a bank payment. The error meant he was 80 cents short on his mortgage payment, triggering a letter threatening him with foreclosure despite him sending a cheque for the outstanding money. The bank has since rescinded the warning, but the man has decided he’ll stick to cheques in future! Another Mail Online story reported the rather foolish vandalism attack on Justice Secretary Ken Clarke’s house by a group calling themselves Real Fathers for Justice. If you’re going to the effort of buying spray paint and breaking into a property to vandalise it, you’d think you’d make the effort to get the spelling right too!

Finally, a report by IT security company Sophos discovered that making mistakes when you type in a URL can have serious consequences thanks to “typosquatters”. These unscrupulous souls register domain names that are very similar to existing websites, in the hope that people will mistype the URL and land on a rogue site instead. Sophos looked at six popular websites –  Facebook, Google, Twitter, Microsoft, Apple and their own site – and investigated over 2000 domains that had one character added, deleted or changed in the address – for example, twitterz.com  and facemook.com. The report found over 80% of the domain names had been “typosquatted” and while most of them were harmless, 5% were either adult or cybercrime sites. Landing on one of those would be a nasty shock if you were just trying to buy a new iPad …

So what’s the point of me reporting all these stories? I’m not a grammar Nazi (despite popular opinion!) and proofreading isn’t the be all and end all of life – but these stories do demonstrate that you need to have your proofreader’s head on, even on social media sites!

I love it....clean and simple...
Author of The Leukaemia Diaries, A.D. Hyde

Alison proof read my book. Came in before the deadline and under budget. Fast and efficient. Highly recommended.
Rob Warlow, Small Business Success