I took part in my first ever Google+ Hangout today and it was a really interesting experience. I have to admit I haven’t entirely got my head round Google+ yet – I use Facebook and Twitter a lot but just haven’t had the time to explore  Google+ properly. However, the Hangout is a feature that neither Facebook nor Twitter has, and it could be the feature that makes me a regular Google+ user.

Today’s Hangout was organised by Julian Wellings of Expertise on Tap, and five 4Networking members took part. I joined a little late and the Hangout was in full flow, but it was really easy to join in. To use Hangouts you need a webcam and either a mic and speakers or a headset, and the first time you use it you have to download a small piece of software – but this took literally a minute and I was able to join. The first thing I noticed about the Hangout was the clean interface. You can have up to 10 users at any one time (I think) and each user’s webcam feed is shown in a row along the middle of the screen, with the current “presenter’s” webcam (the person speaking at the time) in a larger box above the row of images. The Hangout software knows who is speaking at any moment and the larger box automatically switches camera to show the current speaker – very clever! Here are a couple of screenshots nabbed by Julian (hope he doesn’t mind me using them!) 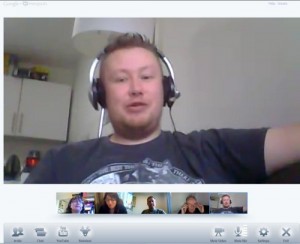 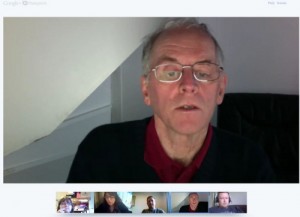 The video was pretty smooth and the audio was excellent and seemed to sync well with the video, which made it really interactive. For about 40 minutes we talked about a range of topics including the pre- and post- Xmas slowdown in small business and the ways we could see ourselves using Hangouts to enhance our business. We experimented with the various tools too – you can all view a YouTube video simultaneously and use a CB-like button to talk over the top of it, and there’s a text messaging box that can be displayed on one side of the screen too. You can even give your webcam image antlers – a bit silly, but provided a few moments’ entertainment!

We also discovered that there’s a different version available – Hangouts with Extras – perhaps a beta, though it doesn’t actually say so. Apparently here you can share screens and write on some sort of message pad, and it integrates with Google Docs for document sharing. I’ll have to try that out some time!

I guess to sum up, Hangouts is a spontaneous videoconferencing facility with some added, interactive whiteboard-like extras. You don’t need to pre-book or schedule a Hangout, you simply click the “Start a Hangout” button on the right of your Google+ profile page. You can choose whether to invite specific people, or open the Hangout to certain Circles or for public viewing. I would imagine there’s also a way to make it private, though I haven’t worked that out yet.

So how could Hangouts be used for business? I wish I’d known about it back in early December when I did my blogging webinar, because it would have been a great way to follow up on the presentation. Rather than just finishing, I could have invited everyone to join me in a Hangout to collect feedback and answer any questions that participants had. I can also see it being really useful for internet-based networking, mastermind groups, focus groups and so on – the way the main camera view automatically shifts between speakers would make it great for virtual meetings, or collaboration between remote teams.  And it would also be really useful for impromptu client meetings, because it’s so quick and easy to start a Hangout. It might even become used for webinars, if I can work out how the Google Docs integration works.

I really enjoyed my first experience of Google+ Hangouts and can definitely see the potential for some exciting business use. Have you used Google+ Hangouts yet? I’d love to hear what you think of it, and what you’ve used it for! 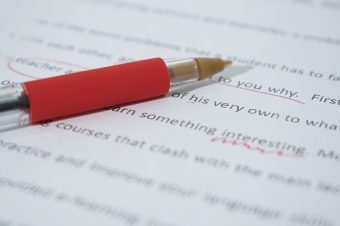 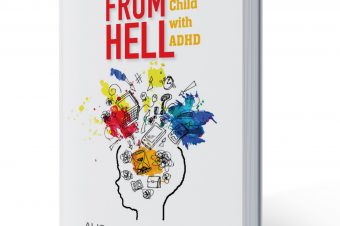 The Proof Fairy’s first rule of blogging – do it regularly. Don’t make your website... Read More