A few days ago I wrote about the goals I set myself for the business in 2013 and how they had gone – and I set three more goals for 2014.

I’ve now heard from three of the willing volunteers who joined me in the New Year Challenge last year and I’d like to share their successes with you.

“In response to the 3 goals I set, I’ve achieved them all – albeit not in the way I’d planned.  I think that’s frequently the case with goals, isn’t it?  I seem to think you said something similar about yours.

So goals 1 & 2 – motivational business courses and BBB Club.  I think I’ve combined the two and helped more people, especially women achieve greater fulfilment and success in both their personal and professional lives.  I’m particularly proud of the fact that several women now are starting their own businesses, having found the courage to follow their dream.

Goal 3 – I DID publish my book (with your help!) but it was a different book.  Perhaps if I hadn’t stated that I wanted to publish a book, then ‘How to get from here to there without going anywhere’ wouldn’t have ‘been born’.  Who knows!   Anyway, I’m more proud of the fact that I’ve written an original book than the book I was intending to write, which would have been mainly a selection of interviews with successful, passionate people.  So for goal 3 I feel I’ve achieved it – and more.

Will let you know about this year’s goals…..”

Congratulations, Carrie! Carrie was my first book coaching client. We started working together in May, and Carrie had a vague idea of the book she wanted to write. Over the next seven months she planned, wrote and edited How to Get from Here to There Without Going Anywhere, and it’s a really great read (though I may be biased!).

Find out more about Carrie rose at www.onelifeyourlifeloveit.com

“I can’t believe it has been a year already. It was a very exciting year for me and my resolutions were partially achieved. I think I will keep those same resolutions this year too as they are worth pursuing.

Goal 1. I have created 360 virtual tours for five charities so far and put them on Google, so that they can benefit from increased online presence. I have also created 360 panoramas of 53 historic churches in Oxfordshire and put them on Google Maps to increase awareness of the rich architectural heritage available to experience within a few miles. 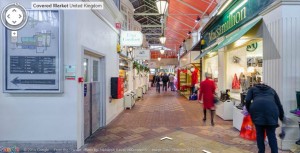 Goal 2. I have created 360 virtual tours for about 35 businesses in Oxfordshire and put them on Google. The biggest achievement was the Oxford covered market which took a year to come to fruition. Now that it is on Google for everyone in the world to experience, I am hoping that in this year, there will be a marked increase in the footfall for the independent businesses struggling in the market.

Goal 3. Going from sole trader to company status is not a big hurdle, just paperwork. Creating job opportunities is. Business is still up and down, so I am hoping it will be more up than down this year for me to decide taking on an intern or an apprentice.”

Sounds like 2013 was fantastic for Nikhilesh, and I am a big fan of his 360 tours, which gives you the opportunity to virtually explore dozens of businesses and buildings around Oxfordshire. You can click here to see some examples.

Find out more about Nikhilesh at www.nikreations.co.uk

“The book arrived on time and the book launch went brilliantly – so that was all good. And I sold nearly 2000 world wide so far so I reached 2/5 of the 5000 goal and actually that’s not too bad given I didn’t really get behind the promotion of it like I thought I would – after the first push that all pretty much happened organically.

The “Waggy Tails” book never even got a look in – it was pushed aside by other book projects which are moving ahead much faster – but this is still on the back burner and will come out again at some point I’m sure.  Not so much a fail as a postponement.

Finally, we’ve started scoping the loft extension project and getting quotes – it’s a bigger project that we originally thought but I think it will happen this year – it certainly feels a lot more real now – where it was a huge pie in the sky when I wrote this as a goal.

So a partial, a postponement and a  ‘getting there’ – too soon to break out the Champagne I think, but maybe the Prosecco 🙂

Again it looks like 2013 was a successful year for Ellen and as a fellow author, I am especially impressed by her book sales!

Ellen has set herself even more goals for 2014 ….. she wants to publish a series of six e-books on Cosmic Ordering for specific issues, a series of ‘working miracles’ e-books for business, three (physical) beautiful art/inspiration journals and one “proper book” – possibly with Hay House. She’s also aiming to launch an online coaching programme, her own TV channel and an international live event; have the most amazing 50th birthday celebrations lasting the whole month of October (!); and to increase the music  in her life by joining a choir, band or an amateur musical or dance group.

Thanks to you all for being so brave about making your goals public. I wish you all the best for 2014!

I am thrilled to bits with the beautiful website Alison has created for me. She understood exactly what I wanted and has responded promptly and patiently to every request and every change I've asked for. She is a pleasure to work with and I can't recommend her highly enough.
Cathy Dean, Thrive Therapeutic Coaching