Here's an entertaining guest blog post from Ciaran Oliver that really demonstrates the importance of using a good proofreader!

I personally find Microsoft Word spell checker very annoying but I have to admit it often saves me from making awkward mistakes. Unfortunately – or fortunately? – in the offline world we cannot count on a spell checker and the outcome is sometimes hilarious. Here is a short collection of embarrassing spelling mistakes that have caused havoc – and laughter. 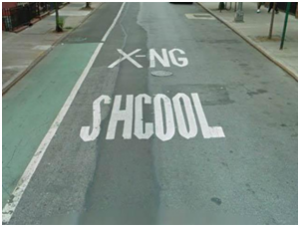 According to the New York Post, in July 2010 a school crossing was misspelled after some electrical construction was done underneath and the asphalt had to be refilled. The people responsible for this grammar horror have been passing the buck ever since, and the famous misspelling was corrected only a few months ago by an anonymous grammar cop. 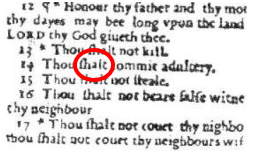 In 1631 Royal printers Barker and Lucas were commissioned a reprint of the Bible by King Charles I. This was a long and painstaking task, as they had to reproduce 783, 137 words. They only missed one word, the most important, maybe.

In Exodus 20:14 they omitted the word not in the sentence “Thou Shalt Commit Adultery”, thus inviting the readers to sleep around.

Coined “The Wicked Bible”, almost all the copies were burned. The publishers were fined £300 (a huge sum in today’s terms) and their license was revoked.

Phone numbers in England don’t have letters, but in the USA do. They are meant to help people remember them more easily, but maybe the olde English system doesn’t work that badly. Mail order giant L.L. Bean had already printed and delivered millions of its annual back-to-school catalogues by the time they figured out they had published the wrong telephone number. The toll-free number belonged, in fact, to a small company based in Virginia. The mega-retailer was forced to pay out a six-figure sum to take over the misprinted phone number.

I guess now somebody has the imprint of the company’s iconic giant boot stamped on their bottom.

In April 2006, Italian airline Alitalia erroneously listed its business-class fare from Toronto to Cyprus as £25 instead of £2500 – triggering an online buying frenzy that lasted twelve hours until Alitalia figured out why everybody was so keen on visiting the Mediterranean country.

The airline tried to cancel the issued tickets, but eventually decided to avoid a PR backlash. Around 2000 passengers flew in style to Cyprus for the price of a train ticket. 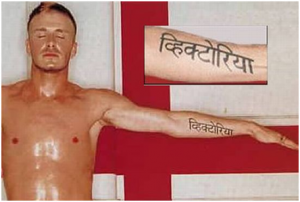 A few years ago footballer David Beckham decided to tattoo his wife’s name on his left forearm. The name was written in Sanskrit and unfortunately David didn’t check the accuracy of the tattooist’s work before it was completed, ending up with a tattoo that says “Vihctoria”. Well, at least the tattoo didn’t cover half of his face, like Mike Tyson’s. But that’s another story.

Ciaran works for Personalised Gifts Shop, a supplier of engraved gifts and personalised gifts for all occasions. When he’s not writing about gifts Ciaran enjoys finding strange and unusual travel stories on the internet.

This is lovely! I struggled to visualise how the blog would look and was a little anxious about it ... but this is really nice.
J.A. Lovelock, author of Let Me Tell You Something