Somehow I’ve missed the #sbs phenomenon that has had small business owners reaching for their phones and tweeting frantically on a Sunday evening. Fortunately, my friend and fellow business owner Neil Jackman of online underwear retailer Whites and Smalls has been following events more closely – and he was lucky enough to be one of the #sbs winners who went to a special event last week. Over to Neil to explain more!

Theo Paphitis, from BBC Dragons’ Den, started Small Business Sunday (#sbs) back in October 2010 in an attempt to help small business owners gain increased exposure by awarding six lucky ‘winners’ a re-tweet (RT) on Twitter. Theo has more than 230,000 Twitter followers and the list is growing. This means that one simple tweet can be spread widely and create a window of opportunity for a small business owner to spread their message to thousands.

The potential benefits of being a #sbs winner are obvious – an increase in Twitter followers, positive publicity, increased website visits, and therefore an increase in sales.

My own business is an online store called Whites And Smalls that retails men’s underwear. Although I trade online, the world of Social Media is not something that I yet feel completely at ease with – although it is getting easier the further I venture with it.

I only came across the #sbs activity earlier this year; on 12th February 2012 I decided I would give it a go, and so I tweeted Theo the following:

@theopaphitis #sbs If you want to change the world, start with your underwear. Happy Valentines! http://www.whitesandsmalls.co.uk

Out of the 1779 tweets that Theo received within the 2.5 hour period, this was one of the six chosen for a re-tweet.

In addition to the spike in website visitors in the following 24 hours, and the numerous messages of congratulations received on Twitter, I also benefitted from an immense feeling of pride in my business and a boost in confidence and motivation. The recognition and support received from so many was quite overwhelming.

As #sbs has gathered momentum and received growing interest in the past 18 months, this Twitter initiative has now developed further. 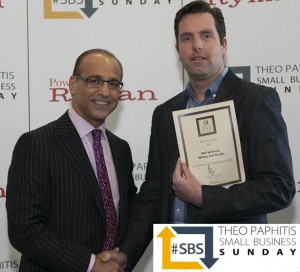 On 30th March 2012, Theo Paphitis hosted an event (sponsored by Ryman Stationery) at Edgbaston Cricket Stadium for all the #sbs winners to date. This provided an excellent opportunity to network with hundreds of other #sbs winners who were feeling equally passionate about their respective businesses; the buzz throughout the day was palpable.

At this event we were told about the launch of the new #sbs website – www.theopaphitissbs.com, which is in embryonic form currently and will grow as each winner completes their profile in the coming weeks. With a Q&A session, meeting many other small business owners, and having a photo taken with Theo, the event passed quite quickly – but I left the venue with a sense of belonging to a whole new REAL community that had been strangely created from the virtual world of Twitter.

This community is ever-expanding and if things continue to progress so positively, then winners may gain in many more ways – with access to additional information, training, and forums.

If you are a small business owner, then this is definitely for you. The rules are straightforward and are outlined on the #sbs website:

If you decide to participate, and get re-tweeted then I look forward to seeing you at a future #sbs event.